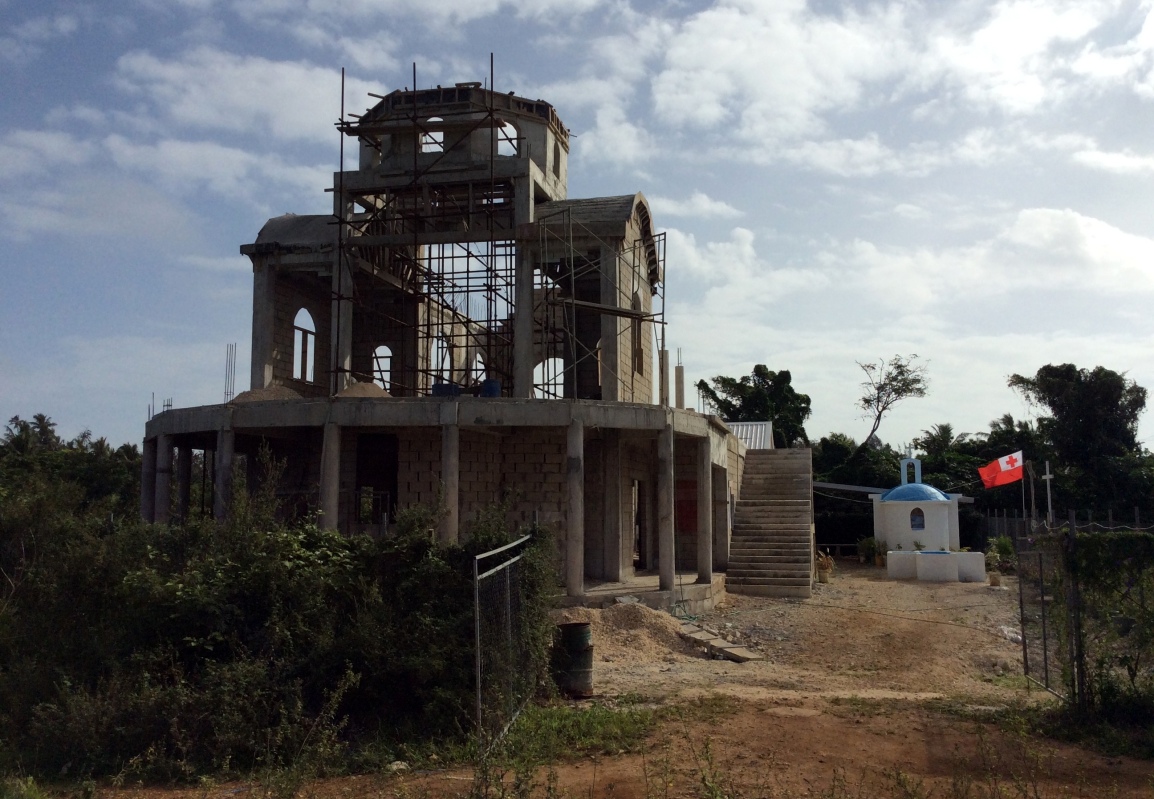 In a previous post we told you how in Samoa our mission team met a Greek man named Elias who had travelled from Greece to Samoa for some family matters. Elias is a civil engineer, a skilled builder and stonemason, and was inspired by the vision and decisiveness of our Spiritual Father, His Eminence Metropolitan Amphilochios. When it became clear that the building project in Samoa had to be postponed, Elias quickly proposed to give his time and talents to complete a different project the Metropolis was working on – the beautiful Church of St. George in Tonga, built in the style of the Greek Islands with shimmering white walls and sea-blue domes.

In His divine wisdom, the Lord brought Elias to us exactly when we needed him. The walls of the church were complete and the time had come to add the curved ceiling and dome on top of the church, which we learned was beyond the expertise of the workers we had hired to build it. Elias had experience building churches, and he and a co-worker, Romeos, flew from Athens to Tonga in 2018 for several months and finished the altar, the dome and arched roof.

At that time our priest in Tonga was an islander himself, from Fiji, and he was impressed with the work of two “Europeans”: “They are really working hard and with love, from the dusk till dawn” he was saying.

They were there during Cyclone Gyta, the worst storm that had hit Tonga in 60 years, which set back the work on the Church for weeks but also made them local heroes of the native neighborhood because of their building skills which they selflessly offered in order to help repair collapsed houses.

In late 2019, Elias and Romeos returned to Tonga with Elias’ brother Niko (not a builder himself) to finish the exterior of the building and make it weatherproof. Niko relays some of the challenges of working with two highly skilled masons in the remote, tropical setting:

“I painted a blue coating on the roof, and getting the large buckets up onto the curved roof was hard. Every trip up and down the ladders was hot and tiring. At the beginning it wasn’t too hard to paint the roof, but later it became very difficult to paint the curved portions and still avoid painting myself into a corner. Then my paint pole broke. We rigged up a replacement using a broomstick held on by a nail, but that also broke.”

The work progressed, though slowly at times. Many things easily available elsewhere are very expensive and scarce in Tonga.  Building materials and quality tools can be hard to find. Additionally, the hot, humid climate and the scorching tropical sun add a physical toll to the frustration that often arises when tools break and materials can’t be found.

Niko tells about the most challenging project he worked on:

“The hardest part for me was adding the arched roof outside the main entrance. We built the whole roof from scratch. First, we created the arch shape out of plywood, frequently viewing it from the neighbor’s house to make sure the shape was right. Then we had to add the metal rebar, cutting our fingers on the small, sharp wires we used to tie the larger metal pieces together. We had two truckloads of sand and one load of gravel delivered, and then we had to haul it up with ropes and buckets up to the second storey. We mixed all the cement by hand and passed it up the ladder one bucket at a time until the form was filled. The process took many days.” 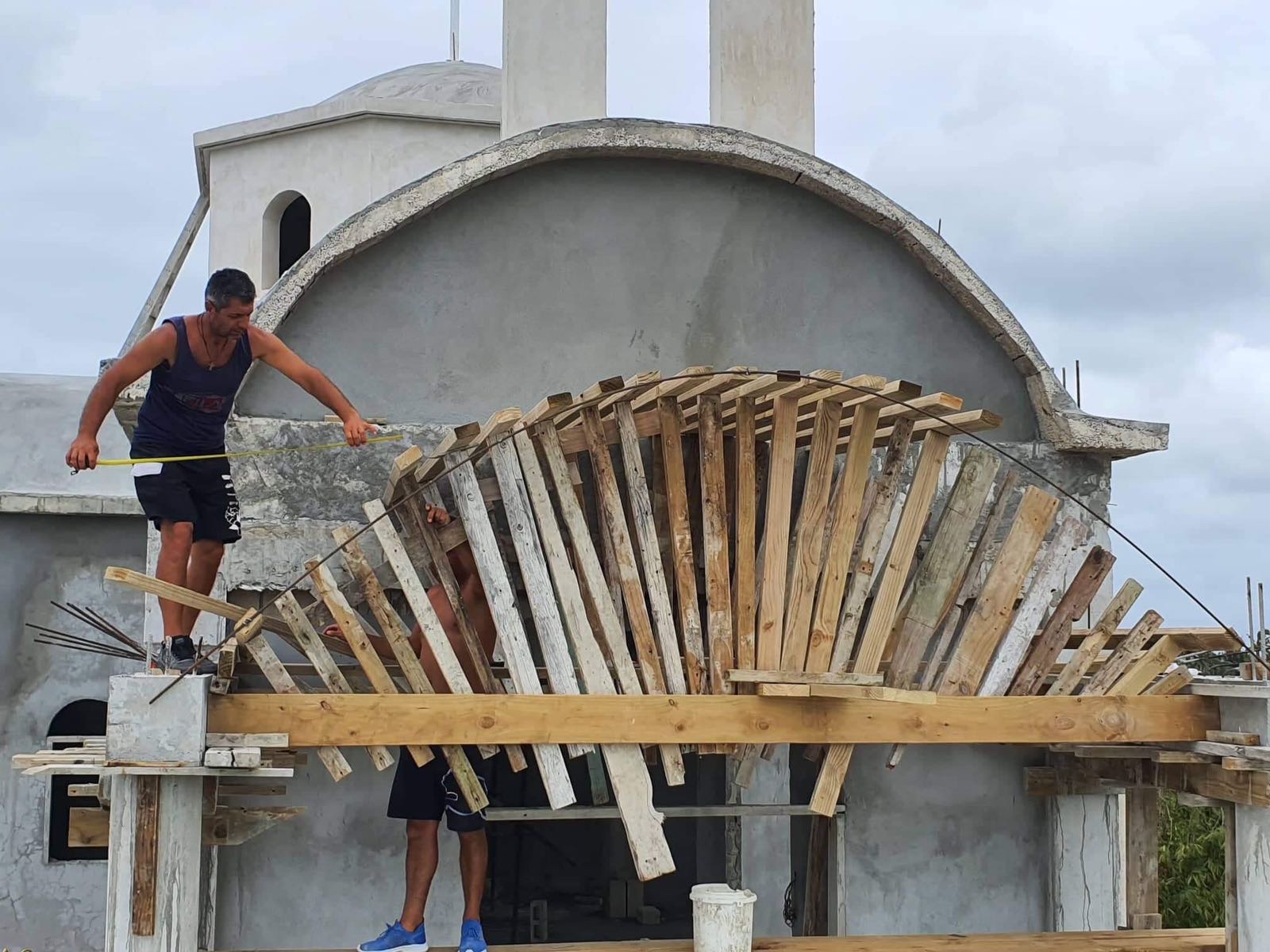 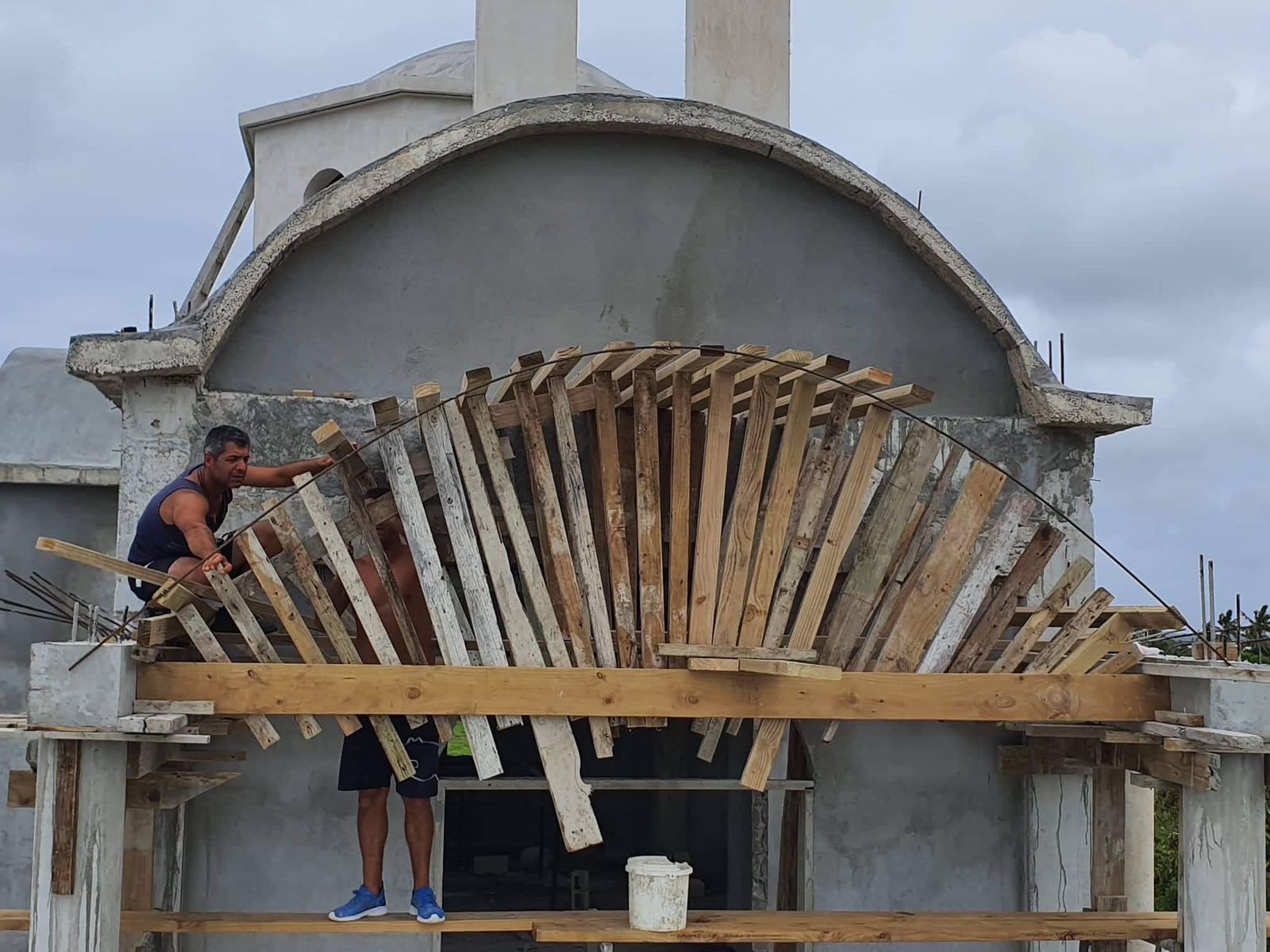 It was very hard to find local workers who would come for more than a short time.  It’s quite common for casual labourers in Tonga to ask to be paid after having worked for a morning,  but then not to  return to work for the afternoon. Elias’ managerial skills were called upon in that unusual and challenging, environment, even for laid-back Mediterraneans.  They had a friend help for one day, but otherwise the three Greek men did most of the labour alone.

We learned about some cultural differences regarding the attitude toward work from a friend and neighbor to the church. Eseta lives in the house next door to the church and owns a thriving restaurant right down the road. She explained that in industrialized societies people often look at work as a way to find fulfillment and achieve some level of wealth, but many Tongans work only enough to meet their basic needs. Tongans prefer to keep their lives simple – the “island lifestyle” you have heard about is very real there. Also, food grows plentifully, and families are close-knit, so if anyone is in need of food, a neighbour or friend will always help them out.

The climate and difficulties getting help were not the only challenges for the men working in Tonga. Due to both time and budget constraints, their diet consisted largely of beans and rice and some locally grown produce. Also, they were all making sacrifices by being away from home so long – Elias had a wife and two sons waiting for him back in Greece, who he naturally missed greatly. Additionally, Elias owns a construction business, which he left unattended while he was away, because both of his workers (himself and Romeos) were in Tonga.

After three months of hard work, it became clear that time and funding were running short and it was unlikely Elias and his team would succeed at weatherproofing the building. They had yet to complete the windows and doors before their work visas ran out in just a few weeks. Through God’s Providence a group from the United States was able to come join the men for a week, bringing additional funds and helping build windows for the 8 arched windows in the dome of the church. We told that story in a previous article that you can read here.

Despite the many difficulties, Elias, Romeos and Niko made great progress on their second trip, completing a few portions of the walls, painting the roof and upper level of the church inside and out, installing a tile floor in the church and posts for a railing on the second floor balcony. They also put in doors and windows for the entire church and completed the majority of the electrical work before leaving.

However, on their way home one more unexpected difficulty arose. The group was scheduled to return home just as the COVID-19 pandemic began. Elias and his team had made a brief stop to visit the mission in Saweni, Fiji, and found themselves stranded in Fiji when all international flights were cancelled without notice. The group was unable to return home for an additional six weeks, when a repatriation flight to Europe was allowed.

As of the time we write this article, the Church of St. George, although not unattended, has remained without the presence of the priest and mission workers since Elias, Romeos and Nikos left in March 2020 because Tonga is still closed to international travelers. Thankfully, God provided the men and resources to finish and protect the church building from the hot sun, strong wind and frequent rain experienced in the Islands of Tonga.

Our hope is to return as soon as the Tongan Government allows international travel again, to get back to constructing the church building, and, even more importantly, return to the small community of Orthodox faithful in Tonga. Keep us in your prayers.

One thought on “The Builder’s Tale”